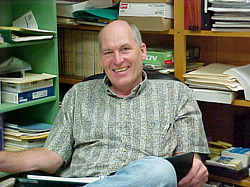 Our current lab is active in a variety of environmental projects that involve classical culturable and molecular techniques to determine bacterial source tracking (BST) for fecal pollution in the various rivers and tributaries draining into the northern portion of the Lake Pontchartrain drainage basin (LPDB). We have monitoring sites dating as far back as 1980 on the Tangipahoa River alone. The molecular techniques including PCR-DGGE based analysis, fluorescent in situ hybridization probes (FISH), 16S rDNA clonal library generation are used to sort out species-specific bacterial indicators. More recently, we have set up a comprehensive anaerobic laboratory including gas manifolds and anaerobic incubators to study various bacterial and archaea anaerobes that are involved in the transformation of organic compounds to CO2, H20 and CH4. Again our study site includes the northern boundaries of the LPDB. This area is important because of the influence by a salt-water gradient from the east to the west and the influx of nutrients and fecal pollution from the north due to storm water runoff of agricultural and domestic sediments into the basin. Our overall goal is to elucidate specific anaerobic groups that might serve as ecological indicators of environmental health. Lastly our laboratory is working on isolating, enhancing, and characterizing the consortia of anaerobic groups of bacteria and archaea that are capable of sequestering and transforming C02 to CH4 in coal beds and oil deposits.

Awarded EPAII (Howard) $ 256,000. Contribution of Microbes and their activity to carbon, nitrogen and sulfur cycling in the LPBD Ecosystem, 2003-2005.

CURRENT LABORATORY COLLABORATIONS (GARY W. CHILDERS AND GARY T. HOWARD)
USGS sponsored collaboration with UIUC that is focused on elucidating the anaerobic nutrient cycling pathways in the lake as well as the key microbial components of these pathways. This anaerobic nutrient cycling study relies on both a classical and molecular approach. Goal is to elucidate anaerobic BST for determining the environmental health of the LPDB.