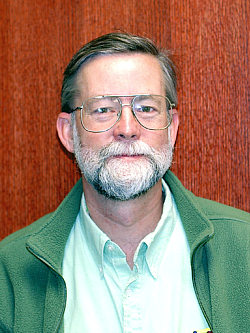 My broad interests are in the function of the nervous system, mainly in humans. The human brain is comprised of roughly a trillion (1,000,000,000,000) nerve cells, called neurons, that make about a quadrillion (1,000,000,000,000,000) connections, called synapses, with other neurons. By studying the function of individual neurons and synapses, we can begin to understand the behavior of neuronal circuits and systems. This information may eventually lead us to an understanding of the underlying mechanisms that produce the remarkable complexity and diversity of human behavior.

Biophysics of Ion Channels. Normal function of excitable tissues such as the nervous system is dependent on transmembrane proteins called ion channels, and the function of these ion channels is dependent on normal molecular structure. Studying the function of ion channels with altered or mutated structure provides an understanding of the biophysical relationship between protein molecular structure and physiological function. This information can be directly related to heritable mutations that underly human diseases such as epilepsy, myotonias, and sudden cardiac death.