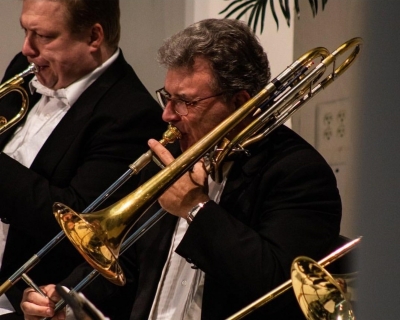 Dr. Johansen has held the positions of Principal Trombone in the Hays Symphony Orchestra, Second Trombone in the Cedar Rapids Symphony Orchestra and currently holds the position of Second Trombone in the Baton Rouge Symphony Orchestra. He has also performed with the Quad Cities Symphony Orchestra, the Dubuque Symphony, the Southeastern Iowa Symphony, the Ottumwa Symphony Orchestra, the Mississippi Wind Symphony, the Natchez Opera, the Rapides Symphony of Alexandria, Louisiana and the Acadiana Symphony of Lafayette, Louisiana. He has held the positions of Principal Trombone with the Composers' Workshop Ensemble at the University of Illinois, directed by Herbert Brün, and with the prestigious Center for New Music at the University of Iowa, directed by Kenneth Gaburo. Dr. Johansen has appeared as a soloist with the Colorado Brass Band and the Greater Western Rocky Mountain Brass Band. He specializes in contemporary chamber music for trombone and has premiered four works, Logaedic Monophony IX for Trombone Alone, Pluto's Postscript for Bass Trombone and Piano, VINSKADJEINDA for Solo Trombone and In Memoriam: John D. Hill for Alto Trombone and Piano all by the renowned composer, Dr. John D. White. He has performed throughout the country at College Music Society and Society of Composers new music conferences in collaboration with Dr. White and they have presented recitals together since 1987.

Dr. Johansen has held positions at Thomas More Prep/Marian High School, Hays, Kansas, where he was Director of Bands, Grinnell College, St. Olaf College, where he was the Instructor of Low Brass and Director of the Norseman Band, Western State College in Gunnison, Colorado, as Director of Bands and Assistant Professor of Low Brass Studies, at the University of Iowa where he was a Visiting Assistant Professor of Trombone Studies and as an adjunct instructor of trombone at the University of Louisiana, Lafayette.

Dr. Johansen spent July of 2006 in Taiwan performing the Sachse Concertino with the Chang-Hua International Music Festival Orchestra. He serves as the Trombone Instructor at the New England Music Camp in Sidney, Maine and began that two-month appointment in the summer of 2007.

Dr. Johansen has served as Undergraduate and Graduate Coordinator for the Department of Music, has served as faculty advisor to Phi Mu Alpha Sinfonia, the men's music fraternity and performs with the University's faculty brass quintet, Southeastern Brass. Dr. Johansen can be heard on Five by Design's CD, Club Swing . He has written an article on the life of Robert Lambert, Principal Trombonist of the Chicago Symphony Orchestra for the International Trombone Association Journal and is a frequent contributor of new music reviews for the International Trumpet Guild Journal and the International Trombone Association Journal.

Dr. Johansen served as a contributing editor for Prentice-Hall's Listen to This! By Mark Evan Bonds, Bedford/St. Martin's Fifth Brief Edition of Listen by Joseph Kerman, Thomson/Schirmer's fifth edition of Listening to Music by Craig Wright and McGraw-Hill's Fifth Brief Edition of Music: An Appreciation by Roger Kamien. He also served on the advisory board for the 6th edition of Craig Wright's textbook, Listening to Music.