During the Fall 2021 semester, students in the Graduate Seminar in Environmental Sociology class engaged in a project with the New Orleans Food Cooperative. The goal of the project was to help the cooperative grow their membership and outreach to the surrounding community.

The New Orleans Food Cooperative looks like any ordinary small grocery store to most people, but it has one very special characteristic - it is owned by the people who shop and work there. Anyone can become a member owner with a one time, small joining fee and then they have a say in what the cooperative does and how it is run. You don’t have to be a member owner to shop there but member owners do get discounts on products, can vote on store policies, and volunteer to sit on the Board of Directors. The purpose of grocery cooperatives, or coops as they are commonly known, is to reinvest in community and the local economy. Coops exist to serve their members who are community members, not corporations and stockholders. In doing so, coops usually have a commitment to environmental sustainability and specialize in products from local producers that share an environmental ethos.

So, after reviewing a lot of the research literature on food cooperatives and educational sessions from Jon Steinman, a food coop expert, students and their professor, Dr. David Burley, began brainstorming ideas to help the coop grow and benefit more people. After a lot of deliberation, emails and visits to the coop, they settled on two major proposals for the coop.

The first proposal was a grant fund to help local farmers or producers that sell at the coop expand their business. The coop has over 4,000 members and if just 1,000 members donate $25 the coop would have a fund of $25,000. The coop could decide how to distribute the funds. For example, they might decide to break the $25K into one grant of $10,000 and two grants of $7,500. Farmers and producers would then apply for the grants and the students suggested that an event be held at the coop where applicants would give their “pitch” on why they should get a grant. People report joining food coops because they are invested in their regional economy and environment and for the local and specialty items that the coop offers. The idea for the grant and the applicant “pitch” event taps into the values that members hold and students believed that this would be an easy way to build member owner engagement while expanding coop principles.

A twelve month postcard campaign to households in the zip code of the coop and the adjacent zip code was the second proposal. Students used their research and sociological knowledge to design attractive, humorous postcards that built on coop principles. Building on the reasons people report joining food coops, many of the designs featured local vendors offered at the coop. The idea is that there are many people in these neighborhoods who would join the coop but they just don’t know that the coop exists, what a coop is, or that it might be too expensive. You can see an example of the January design below.

The students presented their ideas to the New Orleans Food Cooperative management, staff and board members in a written report and a presentation at the end of the semester. The coop was impressed and excited with the proposals and is on the path of implementing them. Students got real experience putting their sociological skills and expertise into practice. Students in the class were Ariane Adams, Cory Barrow, Jessica Bell, Kelsey Brown, Diamond Johnson, Elizabeth Mayer, Donovan Storr and Dani Whiting. 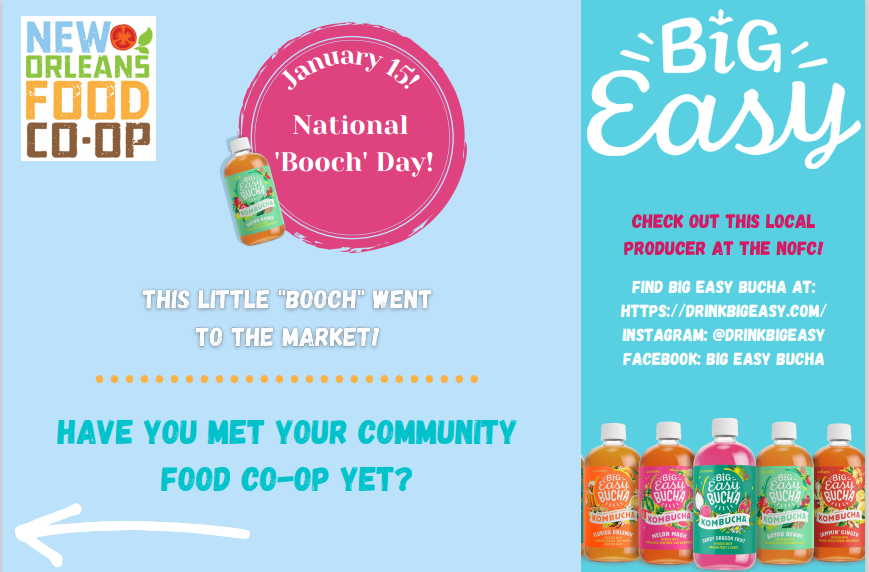 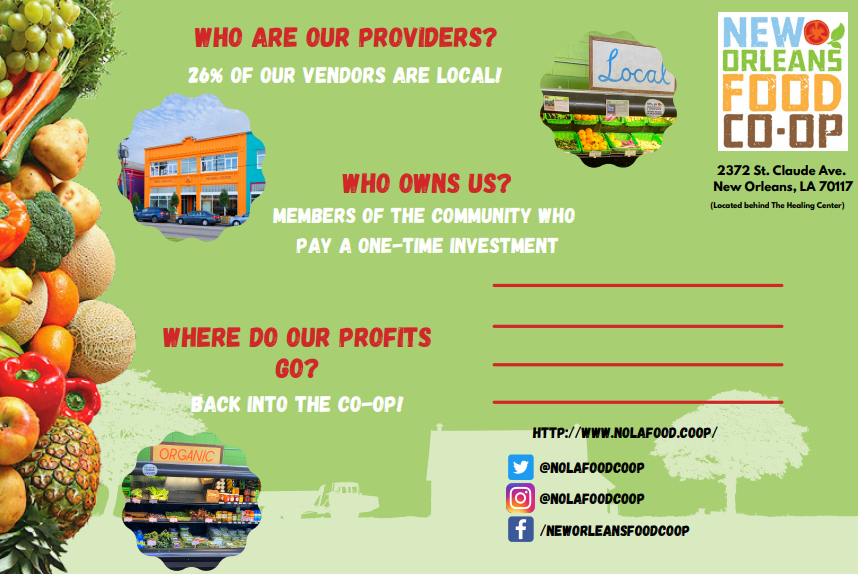