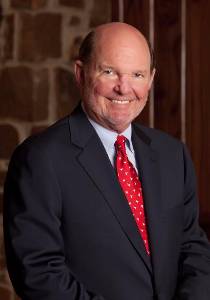 Chief Executive Officer / Chairman of the Board of Directors, Sanderson Farms Inc.

Joe F. Sanderson, Jr. is Chairman of the Board of Directors and Chief Executive Officer of Sanderson Farms, Inc. headquartered in Laurel, Mississippi. Mr. Sanderson is a graduate of Laurel High School and Millsaps College. Upon graduation from college, he returned to Laurel in 1969 and joined the family-owned business, where he has served in various capacities. Sanderson Farms is now a publicly held company engaged in the production, processing and marketing of poultry. It is the third largest poultry company in the United States with approximately 11,747 employees in operations in Mississippi, Louisiana, Texas, Georgia and North Carolina. Revenues were $2,775,000,000 in fiscal 2014.

Mr. Sanderson is active in community and civic groups and is a former Director of the Eudora Welty Foundation and was Vice-Chairman of the Governor’s Commission on Recovery, Rebuilding and Renewal for the Mississippi Gulf Coast. Additionally, he has served as a Director of the Pine Burr Council of the Boy Scouts of America, Salvation Army, United Way, and the Laurel Chamber of Commerce, and a Trustee for the Mississippi Chapter of The Nature Conservancy. He has also served as a Trustee for Millsaps College and the Laurel School District, a Director of Alcorn State University Foundation, and as a past President and Director of the Association for Excellence in Education.

Mr. Sanderson and his wife Kathy have three daughters and six grandchildren.