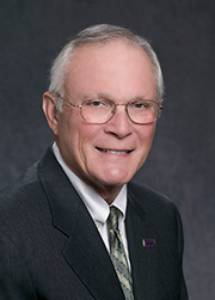 Former Chief Executive Officer / Chairman of the Board of Directors, Bank One of Louisiana (Now Chase Bank)

G. Lee Griffin of Baton Rouge, Louisiana, holds a B.S. degree in economics from the University of Texas at Austin, and a master’s degree in economics and finance from LSU. He is the retired chairman and CEO of Bank One of Louisiana (now Chase). He is married to Elizabeth Barrett Lobdell, and together they have three children, Lee, Bill and Beth.

A native of Leavenworth, Kansas, Mr. Griffin began his career in the banking industry in 1962 as a management trainee for Louisiana National Bank (LNB), which became Premier Bank prior to being acquired by Bank One. In the late 1960s, he became vice president of LNB, where he was responsible for Construction Lending. Also during this time, he initiated and managed LNB’s Real Estate Lending Department, and began LNB’s Credit Card Operations.

From 1971 to 1973, Griffin served as the president of a newly acquired subsidiary, Louisiana National Leasing Corporation. He later served as senior vice president of LNB’s newly organized Administration and Operations Division, which controlled much of the bank’s departmental activity. By 1976, he was elected to the LNB Board of Directors, and was named president in 1978. In 1983, Griffin was named both president and chief executive officer of LNB, and in 1986, chairman of the board. In 1988, he was elected president and CEO of Premier Bancorp, Inc., and Premier Bank when it acquired LNB. In 1990, he was elected chairman, president, and CEO of Premier Bank, N.A., and Premier Bancorp, Inc., which became Bank One of Louisiana, then Chase Bank.

Mr. Griffin has served the LSU Foundation in a number of roles, including president of its Board of Directors, and is the longest-serving active member of the board. His current and former organization affiliations include Louisiana Bankers Association, Louisiana Flagship Coalition, Louisiana State Civil Service Commission, Rotary Club of Baton Rouge and the boards of American Bankers Association, Baton Rouge Area Foundation, Baton Rouge Symphony Orchestra, Boy Scouts of America, Capital Area United Way, Council for a Better Louisiana, Family Counseling Service Center, Friends of the Rural Life Museum, Greater Baton Rouge Chamber of Commerce, Louisiana Art & Science Museum, Louisiana Association of Business and Industry, LSU Manship School of Mass Communication (Board of Visitors), LSU System Research & Technology Foundation, Mary Bird Perkins Cancer Center, National Conference of Christians and Jews, Our Lady of the Lake Regional Medical Center, Pennington Biomedical Research Foundation, SECURE Louisiana's Future, St. James Place, and University Laboratory School Foundation. He is a former chairman of the Committee of 100 and helped to found The Young Leaders Academy of Baton Rouge, Inc., for which he was the organization's first vice chair. He was the Greater Baton Rouge Chapter of the Association of Fundraising Professionals’ 2008 Outstanding Volunteer Fundraiser and Greater Baton Rouge Business Report and Junior Achievement Hall of Fame’s 1996 Businessperson of the Year. He was the recipient of the Istrouma Area Council of Boy Scouts of America’s Distinguished Citizen Award (1994), the National Conference of Christians and Jews’ Brotherhood Award (1992), the Baton Rouge Speech & Hearing Foundation’s Volunteer Activist of the Year Award (1984), and the winner of the 2012 Golden Deeds civic duty award. In addition, Griffin is a former member of the U.S. Olympic Committee and carried the Olympic torch through Baton Rouge in 1996.