The Turtle Cove Marsh Restoration Program has been in place since 1995, when it was funded by the Louisiana Department of Natural Resources to conduct restoration in both Tangipahoa and St. John the Baptist parishes. From 1995 through 2010, Turtle Cove Marsh Restoration Coordinator Fred Stouder focused on planting various marsh grasses and Bald Cypress seedlings, and building levees from old Christmas trees. The program has been highlighted in several media outlets including The Advocate newspaper.

Funding for the program and grass/cypress plantings ended in 2010 (and Fred has since retired as of 2012), but Turtle Cove staff and graduate students, with the help of volunteers from various Southeastern Classes and from various local community groups have continued to deploy Christmas Trees collected within Tangiphoa Parish.

To date, over 35,000 Christmas Trees have been deployed  and over 25,000 marsh grasses and cypress seedlings planted in the Manchac Wetlands under this program.

The program has two main priorities. The first priority centers on building levees that prevent soil erosion and that create a viable environment and land for new plants to thrive. 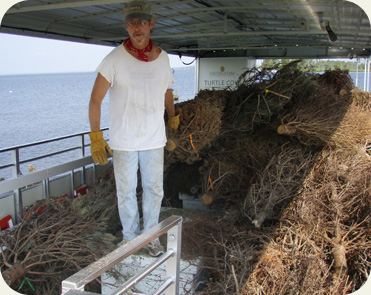 Levee building involves gathering old Christmas trees that have been delivered to Galva Canal via large dump trucks. The trees are hoisted onto the pontoon boat for transport to the sites where new plantings will later flourish. The pontoon boat can hold approximately 200 trees. Generally 200 yards--two football fields--of levee that will sustain new grass plantings and maybe even some cypress seedlings is formed with approximately 2,500-3,000 trees. 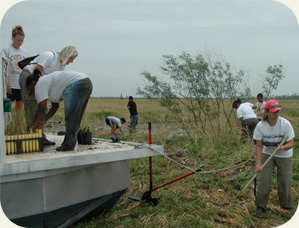 The second priority focuses on planting seedlings to hinder and potentially stop the marshes from turning into open water spaces. The plants also help to build land and prevent soil erosion. Adult volunteers, college students, school groups, and others have given countless hours to the tedious work. 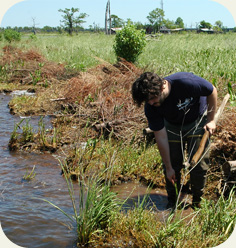 If you'd like to join with one of these volunteer groups, or if you have a school group or organization interested in volunteering, or if your business is interested in providing support for the program, contact Robert Moreau (rmoreau@southeastern.edu) .