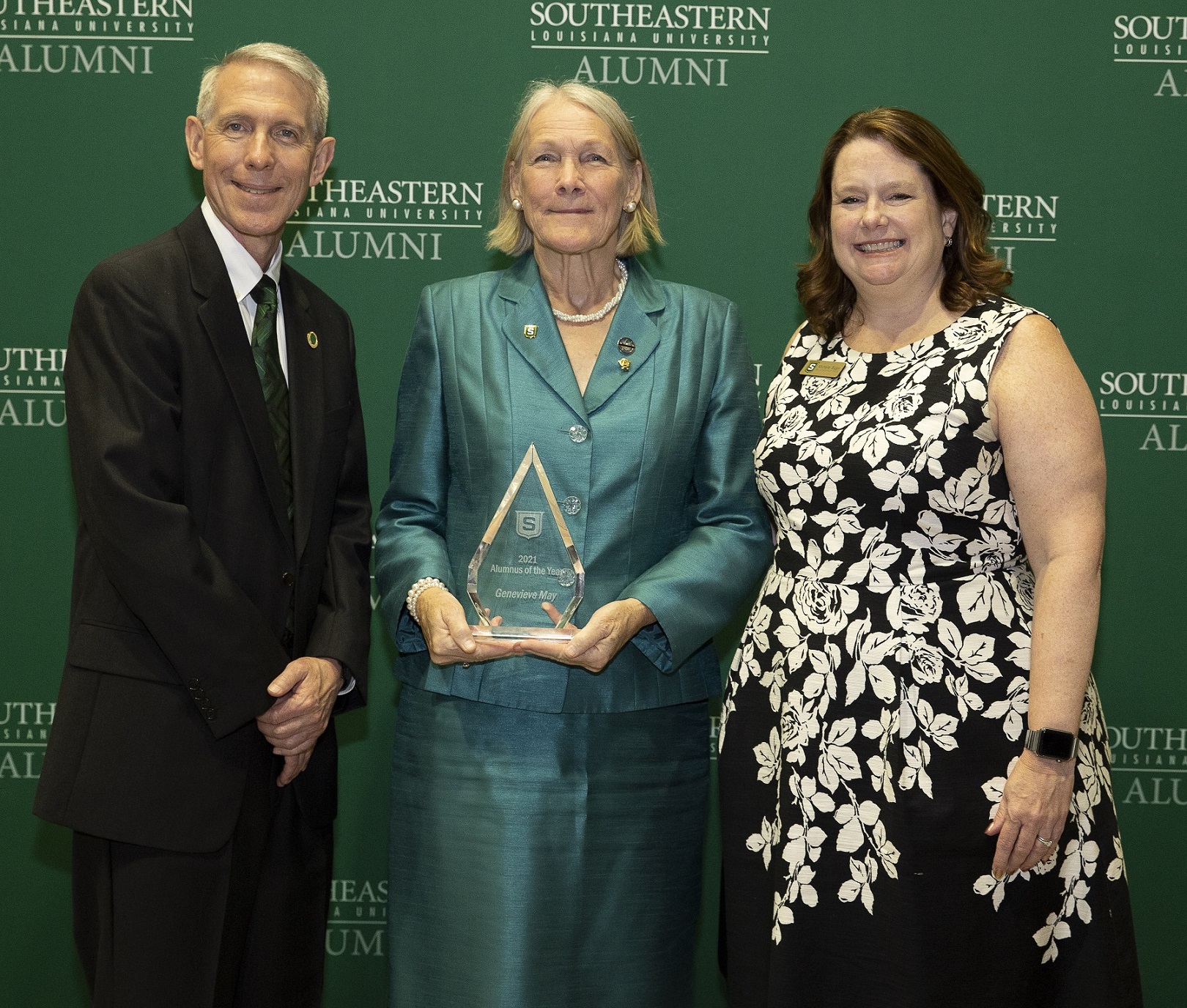 Southeastern Louisiana University recognized distinguished alumni recently at is annual Alumni Awards Evening during Homecoming week. Honored at the event were Genevieve May, a public safety executive and retired U.S. Marshal, as the Alumni Association Alumna of the Year and Jonathan Wong, an area business owner, as the Young Alumnus of the Year.

May is a 1974 graduate of Southeastern. A longtime trooper who served as deputy superintendent with the Louisiana State Police’s Bureau of Investigations, May was nominated by President Barack Obama to serve as the U.S. Marshal for Louisiana’s eastern district. May rose through the ranks to lieutenant colonel and was the highest-ranking woman serving with the State Police at the time of her appointment. She is the first woman in Louisiana to be presidentially appointed to serve as a U.S. Marshal and retired from service in 2018.

Wong graduated from Southeastern in 2003 with a bachelor’s degree in international business. He is co-founder and team leader of Cate Street Seafood Station in Hammond and The Boston Restaurant in Amite. Wong is a member of the 2019-20 Southeastern Foundation Board of Directors, served as a 2017 board member of the Hammond Downtown Development District and a local community advisor to Mary Bird Perkins Cancer Center in Hammond, and was honored by the Hammond Daily Star in 2018 as a “Future 40 Under 40.”

Recognized by the College of Arts, Humanities and Social Sciences was Barbara Tardo, a 1960 graduate with a bachelor’s degree in art. She was a faculty member at Southeastern for 31 years, teaching sculpture, drawing and art history. Tardo’s art career has been extensive. She has been featured in numerous galleries and juried exhibitions, both regionally and nationally, and has taught workshops and given lectures across the region. Tardo has also donated work to various non-profit organizations for their fundraisers, including Southeastern, the St. Tammany Art Association, Habitat for Humanity, and the Hammond Regional Arts Center.

Bill Kingsmill, a 1976 graduate with a bachelor of arts degree in business administration, was honored by the College of Business. Originally from Covington, Kingsmill has had a distinguished career in real estate, starting with Wagner & Truax, where he was in sales and leasing of commercial and industrial real estate for 36 years. He now owns his own company, Kingsmill Properties, where he develops commercial properties and manages and owns over 500,000 square feet of commercial real estate. Kingsmill has been active in the community, serving on the board of directors for the Lake Ponchartrain Basin Maritime Museum, Business First Bank, the Louisiana/Mississippi Certified Commercial Investment Membership organization, and on the Southeastern Foundation Board for 14 years.

The College of Education honored long-term educator John Watson. He is a two-time graduate of Southeastern, earning his bachelor of science degree in health, safety, physical education and coaching in 1982, and his master of education in administration and supervision in 1992. Watson worked in the Livingston Parish school system for many years, rising through the ranks ultimately to serve as superintendent. As superintendent, he worked with President John L. Crain and the College of Education to continue the relationship between the school system and Southeastern through the teacher preparation program and cooperative efforts of both institutions at the Livingston Parish Literacy and Technology Center in Walker.

Crystal Pichon, a 2006 graduate with a bachelor of science degree in health education and promotion, was recognized by the College of Nursing and Health Sciences. She currently serves as CEO of The Safety Place, a non-profit organization dedicated to serving the community through safety education. Their mission is to save and improve the lives of youth, from birth to age 18, by empowering caregivers through awareness of injury risks and prevention. Pichon also volunteers with numerous boards and organizations, including the Infant Safe Sleep Taskforce, the Healthy Blue Community Advisory Council, Safe Kids Louisiana, among others.

The College of Science and Technology honored Jonte Lee, a 2003 graduate with a bachelor of science degree in biological sciences. Since 2012, he has taught chemistry and physics at Calvin Coolidge High School in Washington, DC. When the pandemic hit and schools closed, he moved his chemistry lab to his home kitchen. Now known as the “kitchen chemist,” Lee has been conducting bubbling and fiery science experiments from the heart of his home and streaming them over social media and virtual platforms for his students. His informative and fun weekly lessons have caught on, not only with his own students, but also with others across the country, as well as catching the eye of national media. He has been featured on Good Morning America, as well as People Magazine and The Science Teacher magazine.

Other special awards were presented at the event including the Kathy L. Pittman Distinguished Service Award to longtime Southeastern volunteers Marcia Barr and her husband, the late Cameron Barr; and the L.E. Chandler Award for student assistance to Professor of Communication and Director of the Honors Program Claire Procopio.