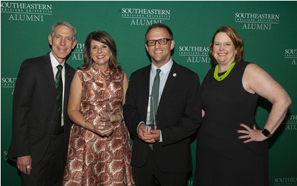 Referencing the fairy tale “Goldilocks and the Three Bears,” Michele Sutton, president and chief executive officer of North Oaks Health System and a 1984 and 1988 graduate of Southeastern Louisiana University said, “Southeastern is not too small, it’s not too big, it’s just right,” as she accepted Southeastern Louisiana University Alumni Association’s Alumna of the Year Award on Oct. 11. “Classroom sizes are small enough for the faculty to know you, large enough to facilitate healthy competition and debate, and just right for learning the skills and acquiring the knowledge to provide for a foundation on which all future successes will be built.”

Sutton was recognized along with Northshore Technical Community College Provost and Vice Chancellor of Academic Affairs Daniel Roberts, who was honored as the Young Alumnus of the Year. Several other alumni and volunteers were honored at the annual event.

Sutton earned both a bachelor’s degree in marketing and master’s degree in business administration from Southeastern. She began her tenure at North Oaks Health System in 1988 as community resources officer and was promoted to executive vice president and chief operating officer in 2006. In 2012, she took on the additional responsibility of administrator and chief executive officer for North Oaks Medical Center. The North Oaks Board of Commissioners appointed her president and chief executive officer of the health system in January 2017.

Roberts graduated from Southeastern in 2003 and 2005 with a bachelor’s degree in communication and a master of business administration degree respectively. He contributed to the creation of Connect to Success, a partnership between Southeastern and NTCC that provides a seamless and supportive bridge program on Southeastern’s campus for NTCC students. It is the largest two-year to four-year partnership in the state, and is considered a national model for similar programs.

Recognized by the College of Arts, Humanities and Social Sciences was Susan Mustafa, a 1999 graduate with a bachelor’s degree in communication and journalism. She is an investigative journalist and bestselling true crime author. Mustafa is the coauthor of “The New York Times” and “San Francisco Chronicle” bestseller, “The Most Dangerous Animal of All: Searching For My Father and Finding the Zodiac Killer,” written with Gary L. Stewart.

Former president and CEO of First Guaranty Bank Michael R. Sharp, a 1970 graduate, was honored by the College of Business. He is a board member of Land Trust for Louisiana and Southeastern Development Foundation and is a member of the Southeastern Alumni Association and the Financial Council for St. Margaret Catholic Church. Sharp was also a “Founding Father” of Southeastern’s Epsilon Phi Chapter of Delta Tau Delta Fraternity.

The College of Education honored Hammond Eastside Magnet School Principal Michael Kyles, Jr. He earned a bachelor’s degree in social studies education in 2009 and a master’s degree in educational leadership in 2012 – both from Southeastern. Kyles is the current president of the Kappa Psi Sigma alumni chapter of Phi Beta Sigma Fraternity, Inc., a member of the Southeastern African American Alumni Chapter, and a member of the Southeastern GOLD Council.

Christina Boover Lawrence, a 2004 graduate with a master’s degree in speech pathology, was recognized by the College of Nursing and Health Sciences. In 2010, she founded the Speech, Hearing and Balance Institute that brought teams of speech pathology students to Nicaragua, Honduras and Mexico to deliver hearing aids and speech therapy to needy children. Lawrence currently has two practices - one in Colorado and one in Mexico.

The College of Science and Technology honored Randell S. Myers, a 1993 graduate with a master’s degree in wetlands ecology. Myers has worked for the Louisiana Department of Wildlife and Fisheries since 1993, where he currently serves as the assistant secretary in the Office of Wildlife. In this capacity, Myers oversees 263 employees with a $56 million budget, and oversees the management of 1.5 million acres of public owned wildlife habitat, as well as privately owned habitat.

The Association’s Friendship Oak Award was presented to retired Visual Art + Design Professor and former Director of the Columbia Theatre and Fanfare Roy Blackwood, former Southeastern Coach Oscar Lofton, and to both the ROTC Alumni and the Delta Tau Delta Alumni chapters in recognition of the 50th anniversary of each organization.

To view photos from the evening, visit our Facebook page