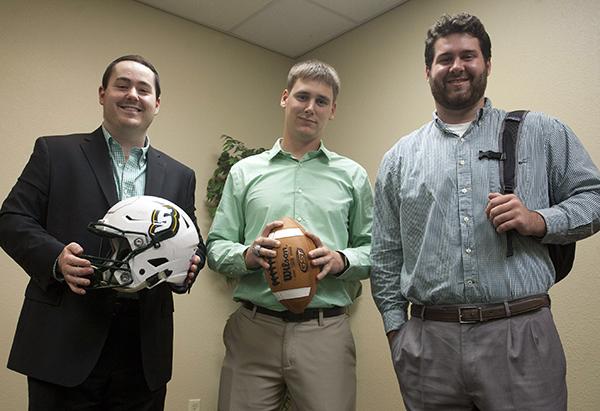 Pictured are, from left, Brent Wagner, Chase Keller, and Pierson Villarrubia: friends and teammates who competed together on the football field and succeeded together in the classroom in Southeastern’s MBA program.

Strength, grit and discipline are qualities all athletes aspire to cultivate.

Both Keller and Wagner graduated last month. Just as they competed together in Southeastern’s championship season of 2013, they walked together in the Class of 2017 at commencement.

Villarrubia, who will graduate this December, began his career at Washington State but transferred to Southeastern in 2014 to be closer to family. Southeastern, he said, was a great choice to continue his education and his athletic career.

All three students credit their mentors in the College of Business and the MBA program as playing the same important role that a coach has on the field. The three give much of the credit for their success to Dr. Andre Honoree, associate professor of business and director of the MBA program.

“The way he has grown this program is very similar to how Coach [Ron] Roberts grew the football program after he took over,” said Villarrubia. “His strategy is almost the same, and it’s working: recruit better talent, better teachers and produce a better product. He is going above and beyond to grow the MBA program. I have been a student in his classes, and I see he has a true passion for teaching. He is an inspiration for me.”

A passion for teaching among all the faculty resonates with this group. As Keller points out, he feels the same way about Associate Professor Rusty Juban.

“Dr. Juban’s international business class really interested me and made me love the program more than I did,” said Keller. “His passion for his students and for what he teaches rubbed off on me in some way, and it made me a better student.”

Wagner will begin law school at The University of Pennsylvania in the fall. He plans to study corporate law and to return to his native Texas to work.

“Having an MBA background, I’ll be able to tie in business experience with the legal environment; it’ll be a real leg up in the field of corporate law, I think,” he said.

Keller currently works for Motiva Convent and hopes to ply his education toward furthering his career there. Villarrubia hopes to become involved in his family’s business ventures.

“After going through a four-year undergraduate program, I can understand why a lot of students feel burned out,” he said. “But with this MBA program, you can see light at the end of the tunnel as soon as you start the program. You are going to be three semesters in and already planning your graduation party. It’s a much different approach from undergraduate work and the future benefits are more apparent from the start. I can’t praise it enough.”

Southeastern's MBA program provides an interdisciplinary learning experience that prepares students with the tools, knowledge and experiences necessary to succeed in today’s competitive environment. Learn more about the Master of Business Administration.