As an operations maintenance supervisor for Syncom Space Services, a contractor at NASA Michoud, Jordan has utilized the discipline and knowledge that he acquired at Southeastern to fast-track his career—landing him the type of job he had dreamed of. Only a year and a half out of college, Jordan has already been promoted once at Syncom. 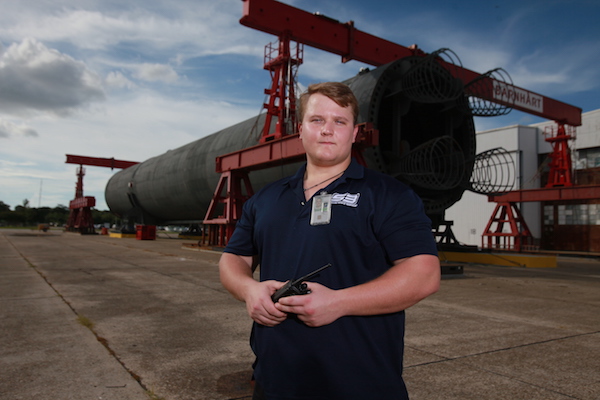 In addition to scheduling maintenance, monitoring systems, and running metrics to increase productivity, he supervises a group of highly skilled personnel who do preventative maintenance work across the facility as well as maintain major systems that actually work on the spacecraft’s tank. “It’s a lot to take on,” he admits, “but I’ve found a routine to make it work.”

Jordan dreamed of one day being able to work with rockets, which is now his favorite part of the job. “I’ve always wanted to work as part of NASA. And now I’m doing something that actually impacts the build of the rocket,” he says.

Jordan recognizes the significance of the work that he performs. “I care about the little stuff, because it will make a difference in the bigger picture. For example, a simple light fixture could be in a critical area. If someone picks up and uses a wrong chemical on the tank because there’s dull lighting in the area, now they’ve just scrapped a couple million dollar tank. I take that to heart.”

During his time at Southeastern, Jordan kept quite busy with both classwork and extracurricular activities, and very much enjoyed the routine it provided him. He was on the Lions football team as a fullback throughout college; in Kappa Sigma fraternity, in which he served as the organization’s events coordinator; worked at Our Mom’s as a security manager before being promoted to bar manager; completed an internship; was a part of the ExCEL scholarship and leadership program; and was a member of Tau Alpha Pi engineering honors society, the National Honors Society of Collegiate Scholars, and the American Association of Drilling Engineers.