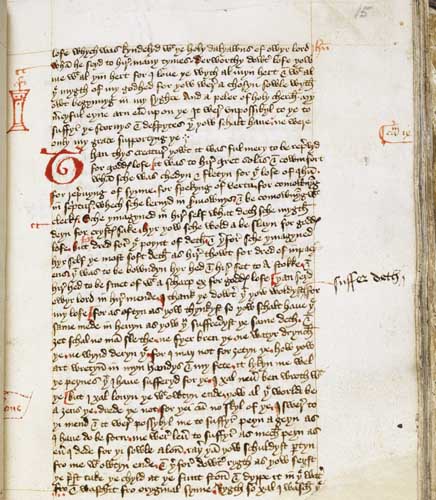 My recent research focuses on literary manuscripts in late-medieval England: their production, decoration, circulation, and survival in the hands of antiquarians and collectors. Authors I study from this period include Geoffrey Chaucer, John Gower, Margery Kempe, William Langland, and John Lydgate; many others writing in Latin, the French of England, and Middle English also constitute critical subjects.

Also, I am currently involved with digital humanities as a teacher and scholar: leading classes in “Digital Publishing” and “History of the Book”; leading a team of students in the creation of an online facsimile and edition of a major work from my period-- The Book of Margery Kempe.

Margery Kempe, The Book of Margery Kempe: A Manuscript Facsimile and Diplomatic Edition, in collaboration with the British Library. Online edition.http://english.selu.edu/humanitiesonline/kempe/

Margery Kempe, Here begynneth a shorte treatyse of contemplacyon taught by our lorde Ihesu cryst,/ or taken out of the boke of Margerie kempe of lynn (digital edition of early print pamphlet by Wynkyn de Worde), in collaboration with Cambridge University Library. Online edition.http://english.selu.edu/humanitiesonline/kempe/showcase/webapp_wynkyn.php

Co-investigator, “Digital Applications in Literary Scholarship, Publishing, and Teaching of Writing,” 2009. Awarded by the State of Louisiana through the Board of Regents Traditional Enhancement Program.

Summer Stipend, National Endowment for the Humanities, 1998. “Manuscript Design in Early Transmission of the Canterbury Tales”: Archival work in the U.S. and England.