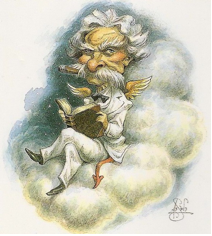 Baetzhold, Howard G., and Joseph B. McCullough, eds. The Bible According to Mark Twain: Irreverent Writings on Eden, Heaven, and the Flood by America's Master Satirist. New York: Simon & Schuster-Touchstone, 1996.

My research is in nineteenth-century American and British literature, specializing in realism and in religious philosophy of the late nineteenth century, particularly in relation to the realist text. In American literature, I have focused on the writings of Rebecca Harding Davis, William Dean Howells, Mark Twain, and Harold Frederic.

In addition to examining the ways in which late nineteenth-century writers conceptualize the project of realism through a religious lens relative to Hebraism and Hellenism, there are several projects of a smaller scope I am developing, including an essay entitled “Fictional Ministers and the Pulpit of Protestant Progressivism in Nineteenth-Century Literature.”

Gale Carrithers Outstanding Essay Award for “The American 'Lives' of Jesus: The Malleable Figure of Christ as a Man of the People.” LSU Department of English (2008).