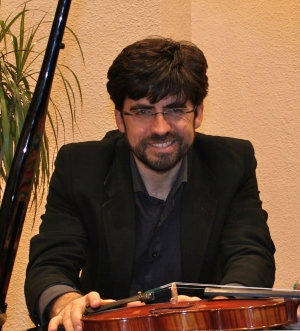 He has been awarded several prizes such as the Jeunesse Musicales Award, “Villa de Madrid” 1st Prize, and Laureate at the 4th International Quartet Competition of Cremona (Italy).

Víctor Correa-Cruz has recorded music programs for the Spanish National Public Radio and has been broadcast nationwide presenting Schubert´s Complete Works for Violin and Piano and programs featuring Contemporary American Chamber Music, Czech Music, String Music by Mendelssohn, 20th Century Sonatas and others. He has premiered pieces dedicated to him by
Spanish and American composers such as Juan Pérez Ribes, Joaquín Borges, Bik Lee, and Samuel O. Douglas.

He is a faculty member of the Stamford International Music Festival (SIMF) in England, where he teaches violin and performs with international artists in Chamber Music Series every summer. The British media refer to the SIMF as the “European Retreat for Chamber Music”. He performs regularly as a member of the Laertes Piano Trio based in Madrid and is a founding member of
the Mediterranean String Trio, resident ensemble at the “Francisco Tárrega” International Music Festival (Castellón, Spain).

Víctor Correa-Cruz has been invited to play in European and American festivals accompanied by Spanish pianist Paloma González. After the release of their cd “Feeling Spain”, the duo has been enjoying regular international appearances with great success.

Born in Spain, Víctor Correa-Cruz earned his degrees in Violin and Chamber Music at El Escorial and Madrid Conservatories, where he studied with violinist Pedro León. He was a Violin major at Indiana University (USA) where he finished his Master´s Degree as a student of Nelli Shkolnikova, and participated in both Joseph Gingold and Franco Gulli´s master classes. Dr. Cruz also attended courses at the Escuela Superior Reina Sofía (Madrid) where he was a student of Zakhar Bron.

His interest in orchestral conducting made him move to the University of South Carolina to earn a doctoral degree in Conducting under maestro Donald Portnoy. At this institution he was awarded the “Manuel and Rose Mary Álvarez” conducting prize. Dr. Cruz has premiered pieces by Spanish composer José Luis Turina in the United States along with his lectures on this composer, and has worked closely with important American composers like Roberto Sierra, Libby Larsen, Stephen Paulus and Samuel Jones, and conductors Paul Vermel and Peter Jaffee.

The critics have acknowledged his talent as a conductor on many occasions. In 2005 he became principal conductor of the “Adolfo Salazar” Symphony Orchestra based in Madrid. Since then he has toured throughout Spain and other European countries with successful performances praised by the media.

In 2010 Víctor Correa-Cruz founded the Orquesta de Cámara Extremeña, with selected musicians from Extremadura (Spain). Acting as its concertmaster and conductor, the ensemble has been acclaimed as one of the most solid and promising groups of the Spanish new generation.

He has conducted at International Orchestra Festivals in Spain (Murcia, Zaragoza, El Escorial and Extremadura) and has been invited to conduct in Europe (Portugal, Italy, Serbia, Poland) and North and South America. His tours leading the Christmas Classical Orchestra presenting music for the New Year´s Concert, have received enthusiastic reviews. He has guest-conducted at the renowned “State Opera Ruse” in Bulgaria.

As a scholar, Víctor Correa-Cruz has published José Luis Turina: Aesthetic and Stylistic Features through the study of his Concerto for Violin and Orchestra (University of South Carolina, 2005). He has written numerous articles for the Vitela Magazine, published by the Extremadura Culture Department, dealing with different topics related to arts and music. He has also rescued forgotten pieces by Spanish composer Salvador Bacarisse.

Before joining the faculty at Southeastern Louisiana University in 2017, Víctor Correa-Cruz was the head of the String Quartet Department at the Conservatorio Superior de Música de Salamanca (Spain) and taught Violin and Orchestra in Madrid, at the prestigious Conservatorio “Adolfo Salazar”. A significant number of his students have won national and international awards.

Along with his academic activities, he keeps developing an intense artistic career as a chamber musician, soloist and conductor.