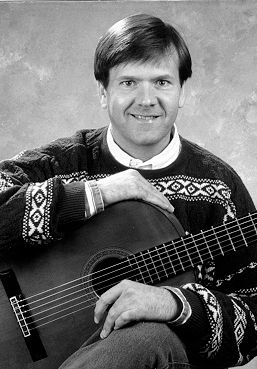 Patrick Kerber holds performance degrees from Loyola University and the University of New Orleans. His studies also include two years of study as a private scholarship student with Pepe Romero in San Diego.

Guitarist Patrick Kerber has been performing as a solo recitalist on stage, radio, and television for over twenty years. He has performed with the Louisiana Philharmonic Orchestra and has been a repeat soloist with the Louisiana Sinfonietta and the New Orleans Civic Symphony. Mr Kerber is also sought after as a recital accompanist, having performed with such artists as John Tyson, Michelle Kemp, and Emily Truckenbrod.

Mr. Kerber's compositions have been heard in such venues as NPR's nationally broadcast Concert Today and the Guitar Foundation of America's annual convention, performed by himself and such acclaimed guitarists as Scott Tennant, Randy Pile, and Michael Patilla. His composition, Bagatelle, for guitar solo was chosen from among over 100 international entries to appear in the Guitar Foundation of America's 1994 Set Piece Composition Anthology published by Mel Bay. A commission from the Southeastern Louisiana University Drama Department to compose incidental music for Janet Martin's Play Talking With led to an invitation to join the music faculty at SLU. Mr. Kerber's experience in publishing also includes editorial participation in Pepe Romero's highly acclaimed Guitar Style and Technique.

Mr. Kerber was also producer of the highly successful weekly radio program , “The Classical Guitar” for NPR affiliate WWNO 90 FM in New Orleans from 1987 to 1992. He has two recordings for the Kubla Music label and is planning a recording consisting entirely of his won compositions.

As an educator, Mr. Kerber brings a wealth of knowledge and practical experience to the studio. His master classes have brought rave reviews citing his uncanny communication and motivational skills.

He has taught at the University of New Orleans, Xavier University, the internationally recognized New Orleans Center for the Creative Arts, and currently is on the faculty of Southeastern Louisiana University i. Though most of his students come form the southeastern United States, Mr. Kerber has attracted students from South America and Europe, and competition prizes are numerous.