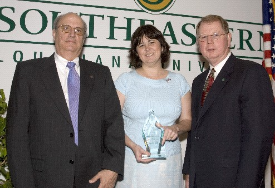 Shortly after, she became the coordinator of the Cancer Center of Greater New Orleans.  In that role, she sought and funded numerous grants, many focusing on tobacco use prevention and cessation.

In her active role in the fight against tobacco use, Swindle has made more than 600 presentations to organizations, schools, and hospitals on tobacco use prevention, cancer, nutrition, and stress management.

Swindle is a trained tobacco cessation counselor with the Community Intervention Program and the American Lung Association. She received the Louisiana Office of Public Health's Award for Outstanding Tobacco Control Education in 1999.