1996 Outstanding Alumnus of the Year 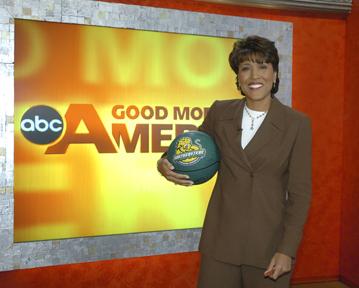 Her broadcasting career started as a student at Southeastern getting her training on the campus radio station and at Hammond's radio station WFPR, while earning a degree in communication.

In many interviews, Roberts said she happened on Southeastern after visiting Louisiana State University as a basketball prospect. She stopped at the campus on the way back, was offered a tennis scholarship – the only women's scholarship available at the time – but went on to excel in basketball.

She became a standout performer on the women's basketball team, ending her career as the school's third all-time leading scorer (1,446 points) and rebounder (1,034). She is one of only four Lady Lions to score 1,000 career points and grab 1,000 career rebounds. During her senior season, she averaged a career high 15.2 points per game. Roberts was inducted into the Southeastern athletic Hall of Fame in 1991-92 and on February 5, 2011 had her jersey retired.

Roberts joined ESPN as a sportscaster in February of 1990.She also began to work for ABC News, specifically as a feature reporter, for Good Morning American in 1995. In 2001, Roberts received the Mel Greenberg Media Award, presented by the Women's Basketball Coaches Association. In 2005, she was promoted to co-anchor of Good Morning America.

Honors have poured in for Roberts. she was named a Louisiana Legend by Louisiana Public Broadcasting in 2001, received the Billy Jean King Contributing Award in 2004, was named one of the NCAA's 100 Most Influential student-athletes in 2006, gained an NCAA Silver Anniversary Award in 2008 and was inducted into the Women's Basketball Hall of Fame in 2012.

She published her first book "From the Heart: Seven Rules to Live By" in 2007 and followed with "My Story, My Song – Mother-Daughter Reflections on Life and Faith" in 2012.

A native of Pass Christian, Mississippi, she graduated from Pass Christian High School as salutatorian of the 1979 class. Born to Colonel Lawrence E. Roberts and Lucimarian Roberts, she credits her parents as cultivating the "three Ds: Discipline, Determination, and "De Lord." She is the youngest of four children with siblings, Sally-Ann, a news anchor at WWL-TV in New Orleans, Lawrence "Butch" and Dorothy. Her father was a pilot with the legendary Tuskegee Airmen.