The Turtle Cove parking lot, dock, and classroom--which is where everyone starts their journey at Turtle Cove--is located at Galva Canal in "Manchac" off of I-55 between LaPlace and Hammond near the Manchac exit. The official address for Galva Canal is 87 Alligator Lane, Akers (Manchac), LA 70421. The GPS Coordinates are 30° 16' 35.4" N and 90° 23' 53.4" W. (NOTE: We also have a boat slip on West Lake Maurepas that is accessible by car, but this is an hour west on the other side of Lake Maurepas from the Boat Shed at Galva Canal and only for researchers).

To get to the Turtle Cove meeting point (Boat Shed/Classroom/Parking Lot at Galva Canal in Manchac), which is where most all of the field trip groups going to Turtle Cove need to meet at, follow these directions:

Use the following directions to travel to I-55, depending on your approach:

Travel west on I-10 toward Baton Rouge/New Orleans airport. Take Exit 210, merging north onto I-55 toward Hammond. Take Exit 15 toward Manchac.

Travel south on I-55 toward New Orleans. Take Exit 15 toward Manchac.

Travel west on I-12. Take Exit 38A, merging south onto I-55 toward New Orleans. Take Exit 15 toward Manchac. 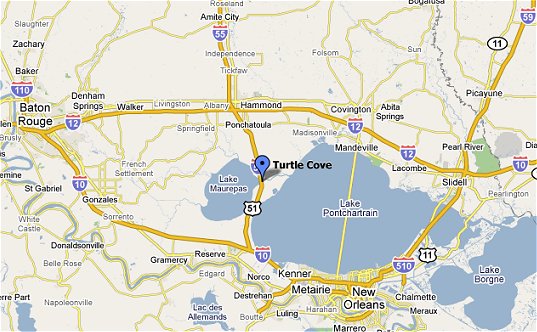