From Friendship Oak to the McClimans Hall clock... from Gumbo YaYa to Roomie...Southeastern treasures its traditions, new and old. Learn more about our special places, happenings and history. 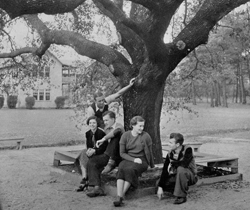 Friendship Oak has been a gathering place for students since Southeastern's earliest days. Its branches once sheltered the "Pop House," selling nickel hamburgers and cold drinks. Legend says that couples who kiss under the Oak will one day wed!

Southeastern first chose the lion as its mascot in 1931. The mascot was nameless until the university acquired a live lion in the early 1960s and needed to call him something. Suggested monikers were narrowed down to "Lobo" and "Grego" -- a play on the school's colors. In 1963 election "Lobo" won, creating a rather awkward situation: Southeastern now had a lion whose name was Spanish for "wolf." In 1964 the name was changed to honor the late Hollis "Roomie" Wilson, a beloved biology professor and fervent Lions fan. Many students have portrayed Roomie in a variety of costumes over the years, but by tradition nobody knows who's inside the Lion suit. Roomie's portrayer is a secret! 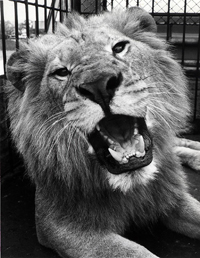 The Homecoming bonfire and spirited Homecoming parade are among the many popular events during Southeastern's week long Homecoming celebration. Students on the "Dream Team" choose the annual Homecoming theme and sponsor fun events such as Gumbo Ya Ya, Lip Sync contest at Cook Fiel and the Roar Rally Spirit Competition. The spirited week also features the announcement of the Alumnus of the Year at the Alumni Association's annual Awards Evening and the crowning at halftime of the Homecoming Queen and Beau. The ladies of the court -- and other female fans -- sport large golden mum corsages.

Southeastern has had an enthusiastic squad of talented cheerleaders since day one! D Vickers, Southeastern's first English and speech teacher, organized the first pep squad shortly after the Hammond Junior College was founded in 1925. Since Southeastern didn't yet have an athletic program, the troupe cheerfully cheered for Hammond High, which housed the junior college for its first two years.

Southeastern is the only university in Louisiana and one of just a few in the nation where students rent, not buy, textbooks. Students save a bundle by paying a small rental fee at the beginning of the semester, and simply turning their books back in at the end of the term.

Since 1983, Southeastern has recognized outstanding faculty with a prestigious honor - the President's Awards for Excellence in the areas of research, teaching and artistic ability. Awards for faculty and staff service were added in 1996. Students have a special honor, too. Students with the highest grade point average in each academic college receive the President's Award for Academic Excellence during graduation ceremonies. 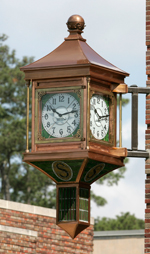 The historic clock that was once a landmark of downtown Hammond now keeps time for Southeastern students. Estimated to have been built between 1915 and 1920, the clock was donated to the university by AmSouth Bank. Totally refurbished and trimmed with stained glass panels featuring Southeastern's logo, the copper timepiece adorns McClimans Hall in Friendship Circle.

Gumbo Ya Ya and Strawberry Jubilee

Gumbo Ya-Ya in the fall and Strawberry Jubilee in the spring salute our state's spicy culture by serving up tons of jambalaya, gumbo, redbeans and rice, juicy berries -- and the biggest strawberry cake you've ever seen. Sponsored by the Campus Activities Board, the fun mid-day events feature cool games, hot bands, and campus-wide camaraderie.

Fanfare and the Columbia Theatre for the Performing Arts

Fanfare, our annual festival of the arts, humanities and social sciences, dominates the month of October and is the "opening act" for the year-long presentations at the Columbia Theatre for the Performing Arts, Southeastern's historic renovated downtown performing arts center. The Fanfare-Columbia season showcases a cultural feast of dance, exhibits, films, jazz, lectures, music and theater spotlighting big name guest artists and our own talented faculty and students.

When Southeastern scores on the gridiron, cheerleaders ring a large bell on wheels. The original bell disappeared during Southeastern's 18-year football hiatus, but thanks to the generosity of Hancock Bank which donated a new bell, Southeastern once again heralds touchdowns and field goals with a spirited peal.

Southeastern's football stadium was built in 1937 -- in just 16 weeks! It provided the young campus with more than just a place to play football, since it also housed a cafeteria, post office, student union, athletic offices and training facilities, and dormitory rooms. It replaced a field and bleachers located near Mims and Southeastern Halls. According to reports, the very first game at the original field drew 5,000 fans. The venerable stadium has been renovated several times and is now undergoing an ambitious makeover that will make it a stellar state-of-the-art sports complex.

When football returned in 2002, the team began a new tradition. Two hours before kickoff, players and coaches, joined by the Spirit of the Southland marching band, make their way to Strawberry Stadium, passing through Friendship Circle to greet tailgating fans.