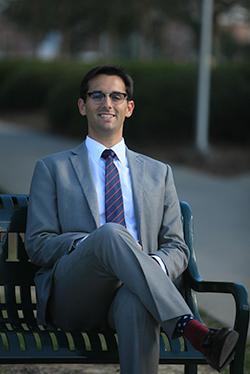 Southeastern graduate David Cavell showed a natural gravitation to the field of politics, starting when he served as president of Southeastern’s Student Government Association and leading to his current role as District Director for a U.S. Congressman.

After earning his bachelor’s degree in business administration and management at Southeastern, David was hired as campaign manager for Louisiana Lt. Governor Jay Dardenne. Right out of college, he was responsible for management of day-to-day operations of the campaign, staffers and volunteers, and the campaign budget.

“Southeastern prepared me with the education to successfully manage a statewide campaign,” David says. “My service to the student body through SGA gave me the skills I needed to succeed, while gaining experience working with diverse groups.”

David believes a profession dedicated to public service was a natural calling. He started his career in governmental affairs by serving as District Representative for U.S. Congressman Bill Cassidy for nearly three years. He was then appointed as District Director for U.S. Congressman Garret Graves. In his current role, he oversees all state operations and manages three district offices.

His drive for excellence in his academic and professional endeavors began at home.  “At a young age my parents instilled in me that hard work, determination and faith will lead to success,” he says.  “At Southeastern, through my studies and campus involvement, these principles held true.

David is currently pursuing a masters at St. Mary's Catholic University and is member of the Thibodaux Rotary Club. He is a graduate of Leadership Lafourche and is a recipient of the Best of Lafourche: Forty Under Forty. In the community, he serves on the board of the Bayou Country Children's Museum and as an Ambassador for the Thibodaux Chamber of Commerce. David continues his support for Southeastern by giving back to the Southeastern Foundation and the Alumni Association.

“I am forever grateful for the experiences and opportunities Southeastern afforded me that helped shape my passion for serving the public,” he says.