The Hispanic Business and Leadership Institute

Hispanics are the country's largest and fastest growing minority, but they are not an easily identified racial or ethnic group (Pew Hispanic Center, Trends 2005). The 2000 Census report describes the Hispanic population as a group with special characteristics and profiles, including age, educational achievement, earnings, and geographic distribution. In May 2008, the U.S. Census reported that the nation's Hispanic population increased 1.4 million to reach 45.5 million on July 1, 2007, or 15.1 percent of the estimated total U.S. population of 301.6 million. National and state estimates by race, Hispanic origin, sex and age released today by the U.S. Census Bureau also show that the Hispanic population exceeded 500,000 in 16 states.Hispanics remained the largest minority group, with blacks (single race or multiracial) second at 40.7 million in 2007 (U.S. Census Bureau, Press release, May 1, 2008)

The largest increase in the Hispanic population is occurring in the southern United States (Pew Hispanic Center). Hispanic labor will expand to nearly 10 million by 2020 (Pew Hispanic Center). As an example of the significant presence of Hispanics in the South, a recent news report on CNN (September 2, 2007) reported that 60% of the Houston's school children are Hispanic.

In a 2007 article in the Baton Rouge Advocate, Penny Brown reported on the uncertainty of estimates on the number of Hispanics who have moved into the area. U.S. Census estimates and a Louisiana Public Health Institute survey are expected to lend some insight later this year. But even those numbers may not offer a true picture. Plenty of evidence suggests the Latino population is booming (Brown, 2007).

The growing Hispanic population in the Southeast Louisiana region presents a unique and complex socio-economic phenomenon. Prior to Katrina, the region's parishes already had a significant and growing population of Hispanics. The influx of Hispanics into the region will impact structures, economy, culture, and vision. Indeed, the workforce will be changing; the educational landscape will be varying.

A larger proportion of Hispanics are now attending college than was the case 20 years ago, estimates place the number of Hispanic youths that have attended college at 1.5 millions (Pew Hispanic Center/ NCES.2006). The increase in Hispanic enrollment is being driven by both population growth and increasing proportions of the population enrolling in colleges and universities. In 1980, Hispanics represented 4 percent of students enrolled in colleges and universities. Two decades later (in 2000), Hispanics comprised 10 percent of the total enrollment. In the 1999-2000 school year, the most popular fields of study in which Hispanics earned bachelor's degrees were business, social sciences/history, psychology, and education (Institute for Education Sciences-US Department of Education).

Hispanic youth account for more than 34 percent of the total U.S. Hispanic population and more than 18 percent of the total U.S. youth population. By 2020, Hispanic youth will make up 23 percent of all U.S. youth (USHCC, 2006). Approximately 2 million Hispanic-owned businesses in the country generate almost $300 billion in annual gross receipts. By 2010, there will be 3.2 million Hispanic firms generating $465 billion in revenue (Small Business Administration, HispanicTelligence�).

The Hispanic Business and Leadership Institute

The Hispanic community has made significant contributions to the development of our great nation and has an important role in today's U.S. economic and social success. According to U.S. Commerce Secretary Carlos Gutierrez, “one of every 13 small businesses is Hispanic-owned in the United States, and the IRS predicts that number will rise to one in ten by 2009,” and, “Hispanic businesses are a dynamic, growing, new force in our economy” The Hispanic population will have an extraordinary economic influence in the next decade. 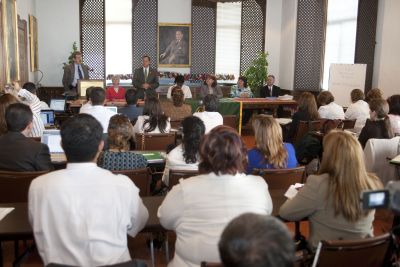 The need to address global issues has long been recognized at Southeastern Louisiana University. The initiative promotes a commitment within the College of Business's mission to “prepare students to be leaders of business, industry, and government in a dynamic global environment” as well as University core values of appreciating diversity, ethical behavior, excellence, quality curriculum and instruction, as well as dedication to service. This implies the need to develop and coordinate resources to promote and improve economic, social and educational opportunities for the Hispanic community.

To provide the socio-economic development of Hispanic community in the Southeast region through a multi-faceted program that advances the professional development and growth of Hispanic youth and enhances the competitiveness of Hispanic businesses in the U.S. and Latin America. 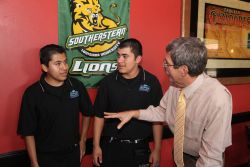 The Institute incorporates a number of unique characteristics to fulfill its mission and goals in order to promote sustainable economic and social development through the nurturing of human capital with special focus on the young Hispanic population.

Leadership in the 21st Century requires understanding of globalization and cultural diversity. As individuals mature within an increasingly global social and business environment, the young are in an especially auspicious position to play a leading role in development. This symposium and attendant workshops examine the role of youth in global transformations and conceptualization of leadership practices.

This program embraces the institute's mission in different approaches. Collaborative efforts within university units will promote global issues and raise a significant appreciation of cultural diversity as well as create an everlasting relationship between the Hispanic community and the community at large in the region.

The annual Hispanic entrepreneur symposium will allow examining the role of entrepreneurship in the economic and business related development of the Hispanic community and how a Hispanic individual may overcome political, socio-economic and technological obstacles. The symposium will approach and encourage greater communication, cooperation and business opportunities between Hispanic and non-Hispanic businesses. The symposium will be conducted for prominent Hispanics and Non-Hispanic leaders. The annual Hispanic Entrepreneur and Global Leadership Symposium will be held at Southeastern Louisiana University's College of Business during and as a part of Business Week. 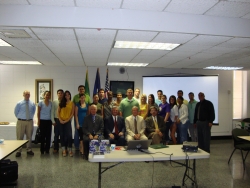 As a complement and important component of the Institute's overarching goals, this annual Hispanic Business Workshop will provide technical, educational and organizational practical training to the Hispanic population in the region.

This part of the program will connect Southeastern students associations such as SIFE, Association of Latin American Students (Southeastern-ALAS), and faculty, in real and relevant colloquia with the Hispanic community.

A fundamental part of this workshop is designed and focused on Hispanic business growth and development. A distinctive feature of the program will be the opportunity for Southeastern students engage in service learning activities with the Hispanic population. 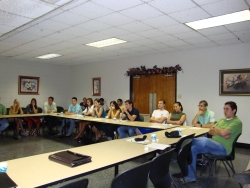 modernization of business practices, and leadership experiences will create opportunities for the Hispanic college business students and serve as a foundation for success and critical thinking.

The Hispanic business community has made significant contributions in the area of economic development in the United States and also holds an important role in future economic and social success. It is common to see the claim stating that Latino educational levels are continually falling behind that of the U.S. native population.

The objectives of the Hispanic Business and Leadership Summer Camp program are ambitious yet attainable. They will guide the formative and creative educational processes of Hispanic college students to help them succeed in their education and life. As a result, a strong business and leadership component will be part of the summer camp. The mission and conceptual framework correlate strongly with the role, scope and mission of the Institute and the Southeastern College of Business.

The program will serve junior/senior Hispanic students from the colleges of business from the eight regional universities that make up the University of Louisiana System.

The Hispanic Business and Leadership Summer Camp is an outstanding opportunity for Latino college students to discover new faces in their lives and to put business skills to work in practical, real world applications. With a comprehensive portfolio of activities and working side-by-side with top business executives and community leaders, the participants in the HBLS will develop a new and rejuvenated spirit of interdependence through a broad array of experiences that enable college Latino students a complete educational experience.

The Hispanic Business and Leadership Summer Camp will go beyond the traditional instruction of business courses by providing Latino youth with the tools and resources they need to develop business opportunities and to become effective community leaders.