Past Exhibits at the Center

From Blood to Berries: A History of Tangipahoa Parish

Created in 1869 as a political ploy amid the turmoil of Reconstruction, Tangipahoa Parish has endured a tumultuous pattern of development. The parish was carved from portions of neighboring Livingston, St. Helena, Washington, and St. Tammany parishes to create a contiguous entity that corresponded with the Tangipahoa River and the New Orleans - Jackson Railroad Line (now the ICRR).
Long burdened by extraordinary rates of rural violence that led the parish to be dubbed "Bloody Tangipahoa,” the region abandoned its attachment to the cotton economy in the early twentieth century with the arrival of strawberry farming and ancillary industries. Today Tangipahoa boasts a rapidly expanding population and growing economy amid one of the most diverse topographical regions of the Gulf South.

Celebrating one-hundred-fifty years of history, our exhibit showcases different industries that helped grow Tangipahoa and how they affected certain cities within the parish. Along with highlighting different festivals and events that put Tangipahoa on the map we take time to honor famous figures who call this parish their home.

We hope you enjoy the exhibit and all of the interesting history Tangipahoa has to offer. If you would like to arrange a special tour for school age children or to inquire further information, please contact the Center at 985-549-2151.

Titled “The War That Did Not End All Wars: Louisiana and the Horror of World War I,” a mock trench, battlefield diorama, and scores of war related items and artifacts were among the features of a special exhibit commemorating World War I at Southeastern’s Center for Southeast Louisiana Studies. The exhibit highlighted the horrors of World War I, depicting images of indescribable butchery on the battlefield, mass genocide, and the terrible conditions of trench warfare. Alternately known as the ‘Great War’ and the ‘War to End All Wars,’ World War I represented an unprecedented human tragedy that devastated Europe and gave rise to political and economic configurations that continue to challenge our world today.

The exhibit opening was timed to coincide with the 100th anniversary of the launching of the Meuse-Argonne Offensive, the largest American military offensive in the nation’s history. An educational project designed to inform and entertain, placed emphasis on all the nations who participated in the great struggle. The exhibit covered all aspects of the war from the sources of the conflict through the ill-fated Russian incursion and the influenza pandemic that killed thousands at the end of the war. 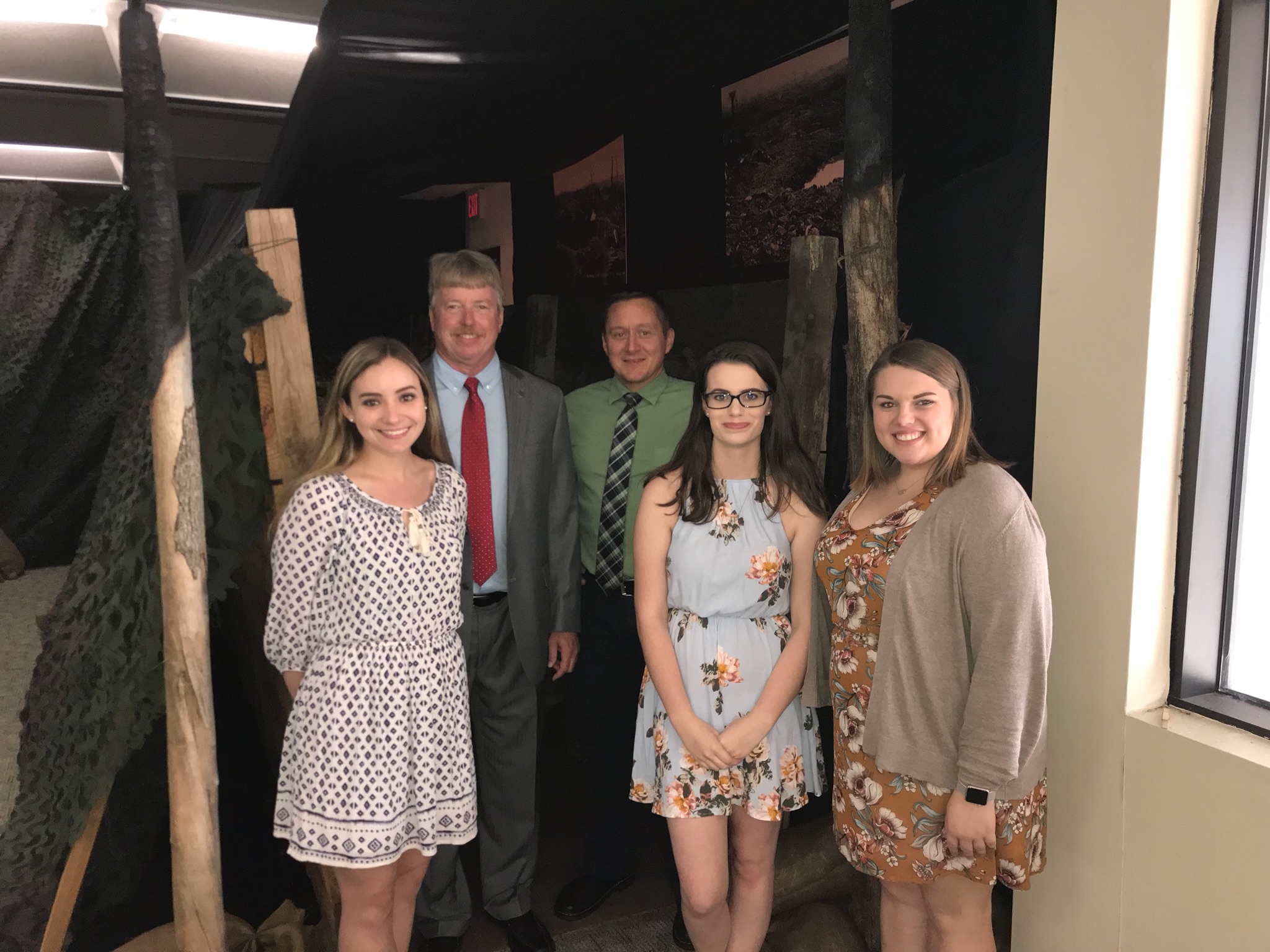 The exhibit titled “Fruit Revolution: The Impact of Strawberry Farming on Southeast Louisiana” emerged as the idea of three graduate research assistants at the center, said Director Samuel Hyde, who is also Leon Ford Endowed Chair and Professor of History at Southeastern.  The exhibit revealed that with the demise of cotton farming due to the arrival of the boll weevil and destruction of the timber forests, the region went into a sharp economic decline that had a devastating impact on society.

The introduction of strawberries, which developed a unique flavor and texture due to the soil quality of the region, rescued the area from its economic malaise and brought other new industries with it, such as box and crate plants and refrigeration companies. The emergence of the strawberry industry was not without controversy and conflict. One portion of the exhibit explains the heated dispute between unions, big industry, and small independent farmers.  It is our hope that this exhibit sheds light on the importance of strawberry farming in this parish. 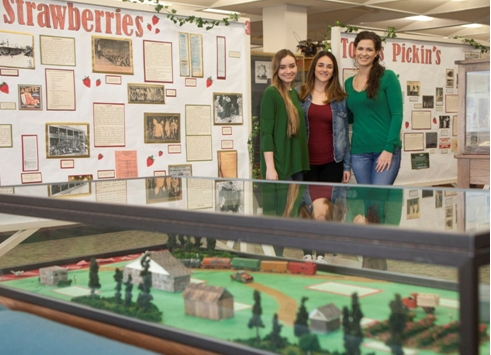 This exhibit illustrated the history of "the most understudied insurrection in American history" --the West Florida Revolution, which created an independent nation in what is now Louisiana's Florida Parishes. The exhibit, presented in cooperation with Secretary of State Fox McKeithen and the State Archives, was on display through 2003.The exhibit centered on the only known surviving copy of the constitution of the Republic of West Florida and supporting documents describing the Baton Rouge battle and efforts to establish the republic

Houma Indians and Their Art

This exhibit included traditional and exotic carved objects by father and son, Cyril and Ivy Billiot. Moss dolls and woven baskets by Marie Dean were showcased in an exhibition exploring the folk art tradition of the Houma Indians. Curated by Dr. Frederic Allamel, “Houma Indian Arts: Triptych,” is the first exhibition mounted to celebrate the folk art of this French speaking Louisiana Indian nation that once dominated the western Florida Parishes.

The whimsical Billiot pieces represented both primitive and craftsman art depicting the familiar creatures of Louisiana's woods and waters, domestic farm animals and international wildlife as well as detailing traditional and modern occupations of the Houmas of modern Terrebonne Parish. Ms.Dean's weavings drew their materials and inspirations from regional resources and local folkways.

This pictorial exhibit was on display through month of February 2000.

African-Americans, usually considered "invisible' in the Age of Jim Crow, are revealed and individualized in numerous glass-plate portraits from several of the collections in the Center for Southeast Louisiana Studies. Black Louisianians of all classes, ages and genders dramatically witness their existence and endurance through the work of local professional and amateur photographers. These images, exhibited in conjunction with Southeastern Louisiana University's ongoing celebration of Black History Month, document turn-of-the century Black life in Louisiana's Florida Parishes.

"100 Years of Sunshine," a centennial birthday celebration for Governor Jimmy Davis, was on display July through October, 1999.

It contained photographs, news clippings, letters, and personal objects that were once used by one of Louisiana’s most colorful governors and co-author of one of the world’s most famous songs, “You are My Sunshine.”

"From the Piney Woods to killing Fields: Louisiana's Florida Parishes and the Challenge of World War II" was on display from April 19, 1999-June 27, 1999. This exhibit examined the Second World War and honored American combat veterans. It highlighted Allied and Axis fighting power through displays of period uniforms, weapons, photographs and documents on loan from area veterans and from numerous private collectors.

"The Civil War in Louisiana as Revealed by the Archival Treasures of the Center of Regional Studies" was on display January-April 1999.

The exhibit drew on the Center's and university archives' resources and included rare documents, newspapers, and private writings, as well as artifacts familiar to Civil War buffs. It highlighted the course of the war with a special emphasis on southeastern Louisiana. Although when most people think of the Civil War their attention is drawn to the large-scale operations in Virginia or Georgia, events in Louisiana remained central to determining the outcome of the war. In addition to countless skirmished, raids, and an enduring guerrilla war, Louisiana served as home to the largest naval engagement in

North American waters, the last and most significant offensive campaign in the western theater of the war, and the largest training base for Confederate troops in the Gulf South.

"The Splendid Little War" was on display July-October 1998.

Although military prowess inspires the American psyche, far less emphasis is placed on the Spanish-American War than on other wars such as the Civil War and World War II even though it played a major role in the emergence of America as a world power.

Often regarded as America's "Empire Building" War, the Spanish-American War was the first sustained conflict in which Americans engaged a foreign adversary overseas and demonstrated the rising potential of American power. Southern participation in this war helped heal the national divisiveness created by the American Civil War and restored the 4th of July holiday, long associated with the twin Confederate defeats at Vicksburg and Gettysburg, to Dixie.

The Center for Southeast Louisiana Studies presented this exhibit to commemorate the Hundredth Anniversary of the Spanish-American War and to honor state and local contributions to the war effort.

"A History of Scouting in the Istrouma Area Council" was on display during February 1998.

The Center for Southeast Louisiana Studies and Clark Hall Gallery hosted this special exhibit celebrating the history of area Boy Scouting.The exhibit featured a collection of Boy Scout memorabilia spanning 70 years. It included displays of Boy Scout uniforms and utensils from the turn of the century as well as field books, handbooks and camporee paraphernalia. Also displayed were facsimiles of two Norman Rockwell paintings, on loan from the National Museum of Scouting. The paintings originally were commissioned by the Boy Scouts of America in the 1920s and 1930s.

“Wiley Sharp Collection" was on display in November 1997.

This exhibit included artifacts used 3,500 years ago by American Indians in the Lake

Pontchartrain basin. The artifacts are among the approximately 6,500 stone, ceramic, bone and shell specimens from the Wiley Sharp collection.

The exhibit included cooking utensils, jewelry, fishing and hunting artifacts, tools and weapons, many of them excavated at Bayou Jasemine in Tangipahoa parish.